In February this year, the government published a policy paper which unpacked the finer details of their 2019 election promise to ‘level up’ less prosperous areas of the U.K. The support that Boris Johnson won in these regions secured him the largest parliamentary majority since 2001, there is thus good reason to scrutinise what he can really offer this new base. The promises of improved infrastructure, government funding and greater opportunity across all of the country enabled him to significantly erode the ‘red wall’ (below), taking 11% of Labour’s 2017 general election vote and performing exceedingly well amongst the lower ‘C2DE’ social grades.

The regional divides and animosities that exist in the U.K. are familiar to many of us, and are reflected in the student body demographics at the University of Oxford. Students from London, the Southwest and Southeast account for 59% of admitted U.K. students, despite only representing 35.5% of U.K. population. This outsized representation is just one materialisation of substantial divides that extend to income and health outcomes too. There has long been a feeling, perhaps strongest in Scotland and the North, that Westminster has ignored and exacerbated disparities by prioritising the Capital and surrounding regions when making decisions relating to investment in infrastructure and public services.

Transport has long been a sticking point, as residents of the North will confirm the connections between the region’s largest cities are sub-standard. London to Birmingham at its fastest is roughly an hour faster than Manchester to Newcastle, despite being nearly the same distance. Perhaps there has been a bias in policy making towards already highly productive regions rather than enhancing productivity. There is a causality dilemma, a chicken and egg problem. In order to be more productive and create more opportunities the North has needed infrastructure investment; in order for Westminster to bestow infrastructure investment upon the North it has needed to display productivity and growth opportunities. Given the disparities and the sense of being forgotten by Westminster, the appeal to those in the red wall of a campaign that promised infrastructure, opportunities and improved living standards to them is easy to understand.

Perhaps I have a tendency to be pessimistic, but I believe that levelling up will fall short. Firstly, a lack of conviction, practical constraints and or monetary constraints could thwart the project in implementation. Even if all of these hurdles are cleared, levelling up will fail to eliminate disparities in opportunities and outcomes. London will remain an outlier because the source of its productivity is the same concentration of skills and knowledge that contributes to inequality.

The Government’s espoused commitment to improving living standards and opportunities across the country more equally has and will continue to be questioned. Mounting inflation and a growing tax burden are fuelling a cost of living crisis exacerbated by war in Ukraine that hits food and energy supply lines. The least wealthy spend a higher proportion of their income on these essentials, and thus their inflation is highly regressive. The distinctly reserved fiscal support that has been offered to households by the government in the wake of events that harm the poorest perhaps justifies discontentment and questioning of government authenticity in tackling inequality.

An FT report found that the ‘levelling up’ infrastructure fund was systematically biased towards conservative constituencies and failed to focus on core measures of deprivation. Instead, the calculus for allocation of the fund was done on the basis of productivity. The result is that many wealthier and elderly conservative regions are set to benefit more from the fund than more deprived areas.

The government has drawn accusations of ‘pork barrel politics’ from their opposition. They make the logical inference that the dubious approach to policy design is because the levelling up program gives primacy to winning votes over making a real difference to the living standards and opportunities of the poorer regions of the U.K.

It should be said that the aforementioned fund represents a small portion of the total investment proposed. Larger sums are earmarked for green technologies, rail in the North and Midlands as well as gigabit broadband across the country. These are all significant projects that would attract investment and create more opportunities in the North by reducing the frictions for businesses operating in the region.

The British, notoriously pessimistic when it comes to grand government promises, are unlikely to be drawn into false hope. HS2 is over-budget and late, not to mention the route that was recently ditched that would have better connected the midlands to the north east. Who’s to say that the same fate will not besiege the infrastructure plans of the levelling up programme?

Besides logistical failure, there is a monetary risk. Rishi Sunak at the helm of the treasury has displayed his natural inclinations towards fiscal conservatism. With the growth of national debt and associated servicing costs through the pandemic it is possible that levelling up could be relegated to a lower priority, especially given the significant time lag between such long-term investments and payoff that would yield political favour.

Wealth and opportunity did not become so concentrated in London by chance, agglomeration occurs for a reason and at a certain point it can be self-perpetuating. Don’t believe that the productivity and living standards of London and the South can simply be transposed across the country through infrastructure investment.

London is a ‘superstar city’ that displays exceedingly high levels of output, income and human development. As with other such cities; New York, San Francisco and Shenzen, their growth in recent decades has been grounded in the knowledge sectors of technology and finance. These industries lend themselves to heavy concentration as they become more productive through the development of ideas and tacit knowledge that thrives through close proximity of workers. Unlike the machines of the first and second industrial revolutions, the ideas and knowledge that fuel growth today cannot be moved across regions without losses in productivity.

Firms recognise the advantages of congregating in superstar cities to take advantage of the economies of agglomeration. If the rail connections in the North are improved, London is still more attractive to a technology or finance firm because of the depth of existing industries. Further to this, highly skilled workers are drawn in by deep labour markets and with them come the incentive for restaurants, galleries, shopping districts to be set up that will keep them there. These shifts have drained other regions of the skills needed to accommodate the skill-biased technical changes that are fuelling growth in highly developed economies. Clearly, the concentration of industries and regional inequalities can be self-perpetuating phenomena. 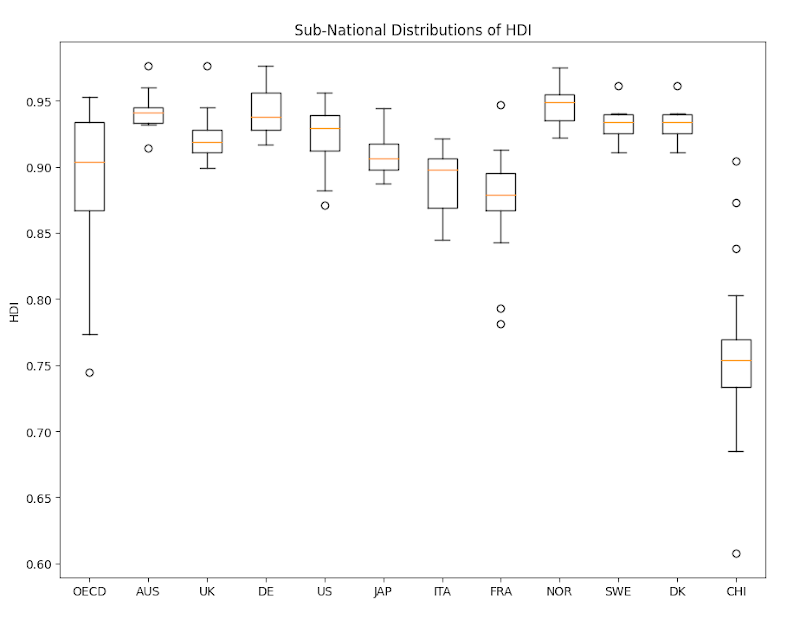 With respect to this, the U.K. is not an outlier among the OECD (above). Many countries have superstar cities or regions that are vastly more productive creating disparities in outcomes that cannot be eliminated. This is shown in the regional data for the Human Development Index, which combines life expectancy, income and years of schooling.

The factors which cause cities to form and grow are powerful, there have been more forceful attempts to allocate wealth and populations such as the Hukou system of household registration in China. Individuals residing outside of their designated region, often where they were born, have diminished access to public services and employment. Despite these punitive measures, urbanisation takes place and people migrate to wherever they see opportunity.

This is not to say that we should not try, we may not be able to remove all inequalities but we ought to make investment where it could yield positive outcomes. There are social costs associated with the inequity of regional disparities as well as significant economic issues for the ‘superstar cities’. The congregation of high paid, productive workers that has made London and other superstar cities grow so productive has also contributed to exorbitantly priced housing markets. The concentration of wealth makes it difficult for less well endowed young people, nurses, waiters and delivery drivers to afford the cost of living and get on the housing ladder. Measures of inequality within London are higher than for the country as a whole.

Any one of a lack of conviction on the part of the government, logistical failure or monetary constraints may scupper the implementation of the ‘levelling up’ program. Even if all the infrastructure plans are implemented we ought not to overestimate the effect that it could have. Inequality may be reduced, more opportunities may be created and we may observe improved living standards in the long run. However, the nature of the Capital’s wealth and productivity lends itself to concentration and it cannot be spread out more evenly, inequality will persist as it has over the past decades (below).  Perhaps a fundamental structural change like working from home could foster a more equal spread of wealth, infrastructure investment alone will not remove the disparities. 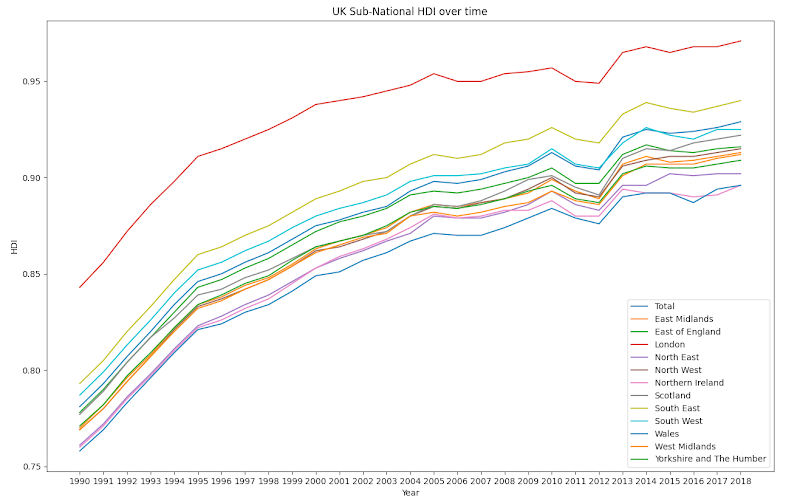