Maddy Kowalenko reports from the climax of a hard-fought term of women*s football: the Cuppers Final.

The women*s cuppers final on Friday night at Iffley was a much anticipated and hotly contested match between St Catherine’s College and the Foxes (St Cross College, Wolfson College, St Anthony’s and Nuffield College).

Both teams had terrific runs to the final and have a history of success in the Cupper’s tournament. The Foxes dominated the competition, defeating the LMH/Trinity College, Queen’s College and Teddy Hall teams by sizable margins to make the final. Catz also had a very strong run to the final getting past Exeter/Somerville and Wadham/ GTC. Their semi-final against last year’s 5-aside cuppers winners, Worcester College, went to extra time and Catz clinched the victory from a free kick.

Both of these teams have been consistent heavyweights in women*s Cupper’s . Foxes made the 5-aside final against Worcester last year and Catz have reached Cupper’s finals in 2019, 2020 and 2022. No surprise that this match got a terrific supporter turnout!

In the opening moments of the match, Chloe-Marie Hawley capitalized on a stray back pass from the Foxes defense to the keeper which missed its target. Chloe pounced on the ball and tapped in Catz’s first goal inside the first minute. The second goal followed shortly after, with Blues player, Olivia Walk, cutting onto her right foot from the left wing and placing the ball superbly into the bottom corner. The Foxes star keeper, Jess, who played a fantastic match, could only watch as the ball hit the back of the net and gave Catz a 2-0 lead. Catz continued to pepper the goal for much of the first half but couldn’t manage to get any further goals past Jess.

The Foxes started the second half raring to go, creating some great opportunities. The Catz defense and midfield really stepped up, with centre backs Daisy Connolly and Maria Watt as well as wing backs Rose Bielak and Anya Robinson, keeping the Foxes chances to a minimum. Meanwhile, both sets of fans were showing their support. The Foxes camp kept some loud cheers going throughout the second half, whilst Catz supporters had face paint, posters and even a giant inflatable cat mascot!

The Foxes team Co-Captains, Anya Linström Battle, Lena Reim and Marta Ziosi, commented on the fantastic atmosphere and the toughness of the match, “It was great to play in front of such a busy and supportive crowd. The match was a good contest and definitely the toughest game we’ve played all season.The Catz press off the ball was very good so we found it hard to keep possession and thereby construct anything meaningful going forward. We found our feet a bit in the second half after settling down.”

It was a hard fought second half with the Foxes throwing everything at Catz. The grit and determination of the Catz girls carried them over line for a 2-0 Women*s Cuppers Final win! No one was happier than the cat!

Catz Women*s Captain, Mia Campbell, could not be prouder of her team and all their hard work this season, “We knew that it would not be easy to beat the Foxes so it is a credit to the drive and desire of this Catz team that we put in the performance that we did in the final. I may be heavily biased, but there is no group of women* more deserving of the cuppers trophy.”

While Cherwell reported on the men*s cuppers match, they, and other Oxford student newspapers, such as The Oxford Student, neglected the equally prestigious women*s final. Mia Campbell thanked those who got behind women*s Football this week. She said, “It was so wonderful to see the support that the team received from Catz students (and beyond), especially from women* who would not normally watch football matches. Myself and the team are incredibly grateful, especially for all the recent support in calling out Cherwell.” It is worth noting that the @catzgirls2022 comment responding to Cherwell’s instagram post advertising the men*s Cuppers final is currently on 173 likes. Thank you as well to OUAFC for organizing the event and competition. 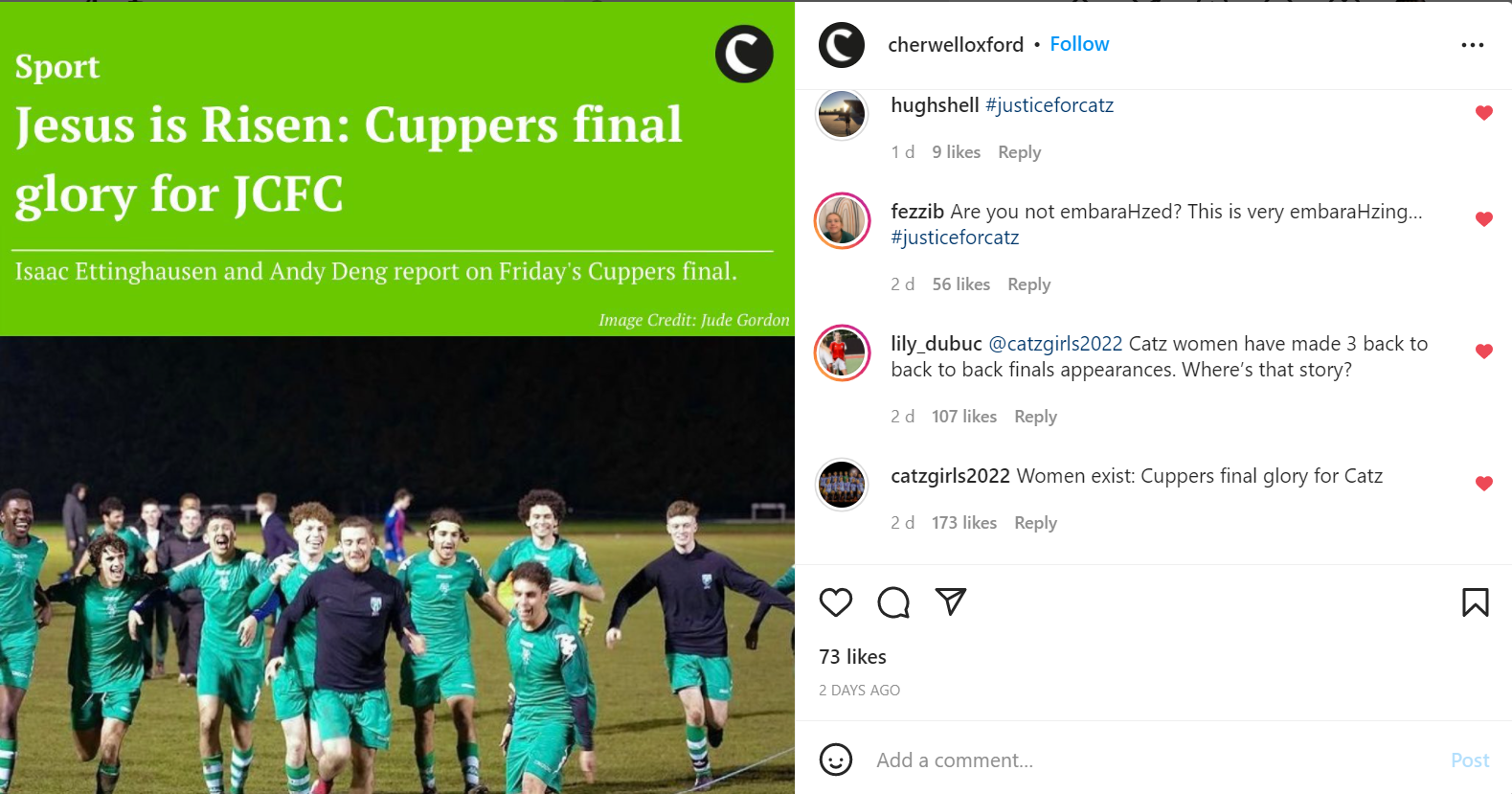 Finally, a massive congratulations must also go out to ALL teams who competed in the Cuppers finals and the competition! As always, it was a pleasure and a privilege for both women*s teams from Catz and the Foxes to play in this final and we hope that in the future the Women*s Cuppers Final is afforded the same coverage as the Men’s counterpart.

This article was amended at 1:46pm to include a comment from Cherwell:

We apologise for any upset that has been experienced.

As a student publication, we are unable to send reporters to every fixture in Oxford. Therefore, we often rely on contributors to express interest for events such as these. We were independently approached with pitches by a member of Balliol and Jesus College to author a report on the men*’s Cuppers final, which we accepted. Neither author is a sports editor.

We were first alerted to this incident several times by members of the Catz community on Instagram stories. We individually reached out to the Catz women’s/nonbinary team, in addition to each accessible Instagram story posted. We offered the Catz women’s/nonbinary team the opportunity to write a match report on their final, and we respect that they decided not to do so for Cherwell.

Moving forward, we have learned from this experience and fully appreciate how important the issue of unequal coverage of men’s/nonbinary and women’s/nonbinary sports is.

Congratulations to the Catz women’s/nonbinary football team on their success. We look forward to reading the match report in the Oxford Blue.