In 2016, the UK voted to leave the European Union and Donald Trump was elected President of the United States. In 2020, COVID wreaked havoc on global supply chains. In 2022, Russia was cut off from the SWIFT interbank messaging service and now Finland and Sweden have announced their intentions to join NATO.

The political success of protectionism, the exposure of the fragility of global trade, and a new wave of economic sanctions are individually significant news stories. All together they reveal a broader narrative of the world disentangling itself from decades of unfettered globalisation.

Globalisation has fostered rapid economic development, unprecedented peace, innovation and efficiency across the world. However, changing risk and political calculations could alter the course of the world’s economy.

Globalisation has not served everyone. While global inequality has declined, rising inequality within rich countries has fuelled an undercurrent of discontent. Le Pen tried, and the Brexit and Trump campaigns succeeded, in appealing to those ‘left behind’, who saw their manufacturing jobs exported while wealth was concentrated in metropolitan hubs.

Enticed by cheaper costs of production and the reduction in trade barriers, firms set up convoluted yet spectacularly efficient global operations. For the developed world this delivered cheap products, and for the developing world investment created manufacturing jobs fuelling development and a decline in poverty.

The cost of this efficiency and interconnectedness is fragility and volatility. In 2008 it was hubris on Wall Street, in 2020 it was a virus outbreak in Wuhan, today it is a war in Ukraine hitting food and energy supplies. In an interdependent world local events can have disastrous butterfly effects. Protectionism, export quotas and ‘reshoring’ of supply chains have been reflexively suggested as this realisation dawns on them.

Once it seemed like the world was converging to liberal democracy. Orbán, Xi, Putin, and others suggest that autocracy has not been condemned to the history books. They represent a contradictory political philosophy to that of the West, one that questions democracy, individual rights and self-determination, and instead gives primacy to the ideals of an autocrat.

The post-cold war decades were characterised by western hegemony led by the United States. This is no longer the case: interconnectedness and specialisation in trade gives leverage to many more countries. This power emboldened authoritarians to project their philosophies through politicking as well as by force.

In lieu of physical combat western leaders have resorted to economic policy. Russia has been cut off from global financial systems, their assets seized and their trade (besides oil and gas) banned. Other countries, notably India and China, continue to trade with the pariah state.

The war in Ukraine and the global response seems like a step towards a global economy divided between autocracies and democracies, but what could be some implications of such a schism?

Globalisation and economic interdependence created a form of mutually assured destruction, heightening the stakes of conflict. The sustained level of peace between nations over the past few decades is unprecedented. However, an autocrat whose nation is less economically involved with a potential adversary might be more aggressive.

Aggression could be reciprocated with boots on the ground but the western appetite for conflict is minimal. Western leaders have considerations such as the reaction of the free press and fair elections to make. The alternative is sanctions, bans and asset freezes.

Economic warfare, however, is unsustainable. Every time sanctions are levied or assets are frozen the global economy becomes more divided and adversaries look for ways to reduce their dependence on the dollar and western financial systems. A more divided economy makes economic sanctions toothless and physical combat could become inevitable.

While major global powers play at the high table of global geopolitics, smaller nations could see themselves become reliant and their self-determination stripped. Malaysia is a parliamentary democracy, a legacy of British rule, but their main trade partner by far is China. Malaysia and other similar nations may find themselves locked in the sphere of influence of powerful autocrats because of ‘economic gravity’ despite the costs.

One of globalisation’s most eminent features has been the export of manufacturing to emerging markets. While this has harmed low-skilled workers in developed economies, it has brought us cheap goods, and delivered jobs, growth and prosperity to poorer nations.

Proximity and promises of investment such as China’s Belt and Road Initiative could leave developing economies and manufacturing hubs separated from the West. Division would incur higher inflation for us and diminished investment and development for emerging economies.

As well as goods and capital, globalisation has allowed for the flow of people and thus ideas across the world, facilitating the best matching of skills with jobs. Without these free flows and competition not only will the world be a less efficient one but perhaps a less innovative one.

We have seen the crises, the sanctions and the political trends, but is this division materialising? 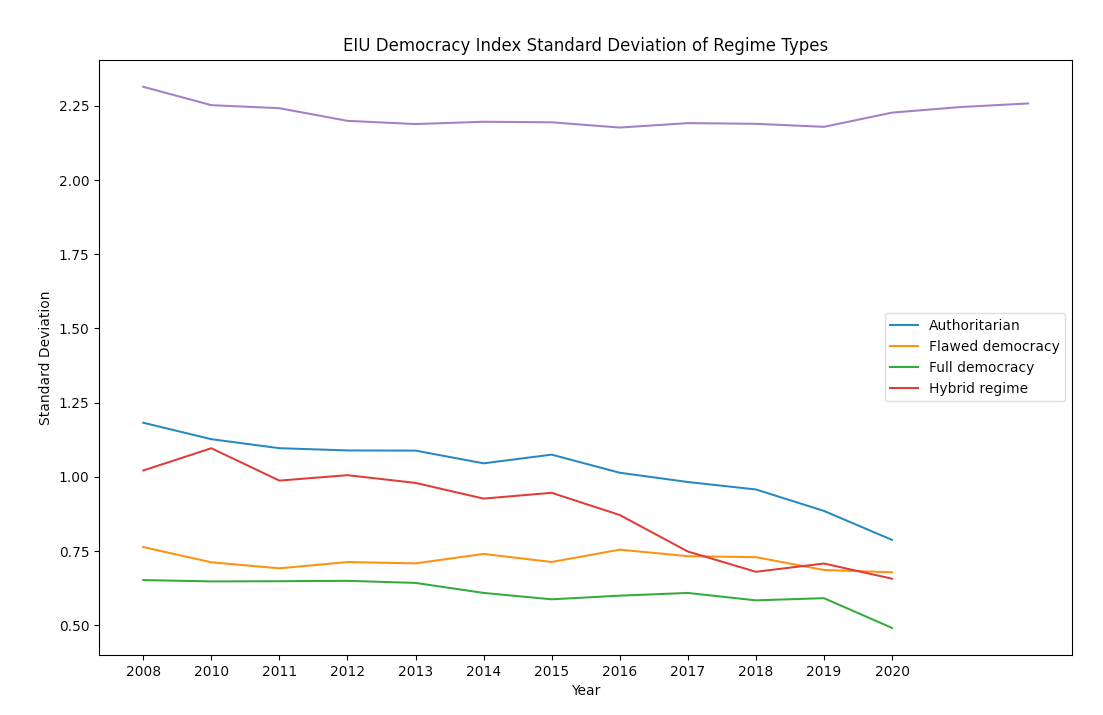 I proposed the idea that we would see a schism of the world into Autocratic and Democratic systems. The Economist’s Intelligence Unit publishes a Democracy Index, which categorises countries into authoritarian states, hybrid regimes, flawed or full democracies. The overall standard deviation between countries hasn’t grown, however the spread within the categories has shrunk, suggesting democracies are becoming more democratic while autocracies are becoming more autocratic.

UN General Assembly voting patterns are a useful proxy to understand a country’s political leanings and alliances. Looking at the distribution of rates of agreement with China and the United States in the 1990s and the 2010s, we can see some increased polarisation. The evidence is tentative but it seems that the global political divide has widened since globalisation’s heyday.

Openness to trade, the share of trade as a proportion of GDP, peaked before the global financial crisis and has not recovered since. Trade tensions and ideas of reshoring brought on by the crisis will only be exacerbated by recent events. Tariffs have not begun to climb, but they do seem to have bottomed out. Free trade areas such as those in South East Asia and Africa are proliferating, however they could perpetuate division. Customs Unions have been proposed as a next step for ASEAN and the African Economic Community making them more insular by imposing tariffs on imports from outside.

Global cross-border capital flows have declined 53% since the financial crisis, however the Foreign Direct Investment component of these flows hit their highest level since the crisis in 2021. The collective wisdom and foresight of businesses is seemingly that the world will remain connected for the foreseeable future.

We are yet to see a full scale ‘de-globalisation’ or schism between the west and the rest, but the indications of division are evident. We should be wary: not only would a divided global economy be less prosperous but it would surely also be more dangerous and volatile.

Tim is a first year Economics and Management student at Keble College. He writes about contemporary issues as well as underlying global economic trends to understand recent events.