As the chequered flag fell on last September’s Italian Grand Prix, a few members of the Mercedes catering team walked down the pitlane to the McLaren garage. They took with them six bottles of champagne. McLaren had just won a sensational 1-2 and in an act of true sportsmanship, the Mercedes caterers wanted to make sure that everyone in the team could enjoy a bit of bubbly.

But beneath the wholesome act lies a stinging reality: McLaren hadn’t stocked enough champagne because they had stopped needing it years ago. It had been nine years and 171 races since their last win.

It had been a long road to the bottom for the team that had once beat the world with Ayrton Senna, Alain Prost, and Lewis Hamilton. Some trace it to their loss of key personnel: Adrian Newey, the most decorated designer in the sport, in 2005; Hamilton, their most decorated driver, in 2012. Others point to a dyad of scandals: Spygate in 2007, when McLaren was disqualified from the championship and fined $100 million for stealing technical information from Ferrari, and Liegate in 2009, when they were disqualified from a race for lying to the stewards.

But I think this story revolves around a few bad cars, engines, and a decade of delusion.

Mercedes supplied McLaren’s engines from 1995 to 2014 and together the pair won 78 races, three drivers’ championships, and one constructors’ championship. But McLaren waived their right to exclusively use the Mercedes engine in 2009 to allow the former Honda team, saved by Ross Brawn, to continue to compete. Remember that from last week’s article? An innocent act of charity. Innocent until Brawn GP romped to both championships and Mercedes bought the team, relegating McLaren to mere engine customers.

This triggered McLaren’s switch to Honda engines in 2015. The logic was simple enough. Team boss Ron Dennis proclaimed that “you have no chance of winning the world championship” if you are simply an engine customer. Others agree. Red Bull has started designing its own engines for many of the same reasons. There are few examples of engine customers beating the main team. Perhaps the main team gets updates before the customers; maybe they reserve the quickest engine modes. Even if not, a car surely won’t be as quick if its engine was designed for a different car. Nor will the operation be as slick.

But this analysis was flawed. Recent rules stop engine manufacturers from keeping the best engine for their own team. And the engine suppliers tend not to do that anyway.

More importantly – the switch to Honda engines was an unmitigated disaster.

For one, the engine was unreliable. One fan made a Has McLaren Broken Down Today? website. The Belgian race exemplified the absurdity of their plight: they got a combined 105-place grid penalty for needing to change engine components. The grid only has 20 places. And when the engine wasn’t breaking down, it was just slow.

But if it was a mistake for McLaren to switch to Honda engines, it was a mistake of equal magnitude to blame Honda for all their troubles. Honda became the scapegoat that blinded McLaren’s introspection.

The top brass was adamant that they would be back to their winning ways as soon as Honda got a grip.

For example, Ron Dennis, McLaren’s CEO, said in 2015: the car is “certainly a match for most of the cars on the grid. Everyone in Formula 1 knows that… If [Honda] deliver their promises then there is no question that we will be far more competitive in the next few races.”

Or take racing director Éric Boullier, when asked in 2016 to rank the teams, who said: “Now it is Mercedes, Red Bull, us, and then Ferrari, Toro Rosso, and Williams. They are clearly behind [excluding the engines].”

So when McLaren ditched Honda for Renault engines in 2018, Boullier confidently pronounced: “I believe that we will at least win a race … We are going with Renault to have a better engine and get back to those top positions.”

Finishing seventh – with a high of just one fifth-place finish – must have been an awful surprise for him.

In truth, McLaren’s slump was not fully down to their engine. A quick look at McLaren’s points, wins, and podiums over the last decade is telling. Their slump clearly pre-dated and outlasted Honda. They had been building poor cars for years. 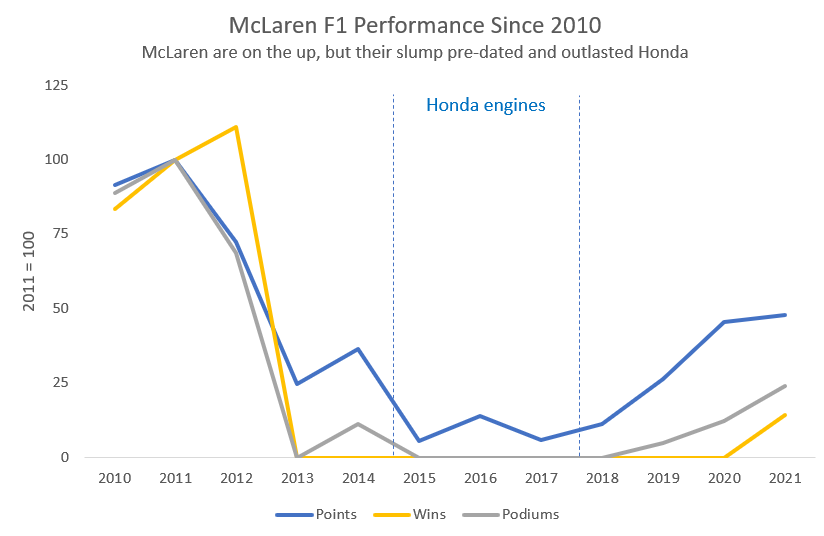 Their lack of a wind tunnel was slowing their ability to improve the car. Their matrix management system, in which employees reported to several managers, fudged responsibility, and created a blame culture. Their anachronistic boss, Ron Dennis, did not help with his insistence on, for example, clearing away the garage each evening, taking valuable hours away from making the car go quicker. More generally, it was not a happy team: promising young driver Sergio Perez was dropped after being told he would be retained; Kevin Magnussen similarly got the sack on his birthday.

The team is now on the up: they’re investing in a wind tunnel, their latest rookie, Lando Norris, is one of the rising stars of the sport, Dennis is gone, and their new boss, Andreas Seidl, has brought a hard-nosed pragmatism to their rejuvenation. When they endured a difficult pre-season test this year, they were quick to admit that they had not done a good enough job over the winter – just four races in, they have recovered to be the fourth quickest team.

But they’ll have to maintain this momentum if they want regular repeats of that magical race in Monza. They still don’t need to bring champagne to each race. Not yet.

Jacob writes a column about Formula One for The Blue. He is from Cumbria and studies PPE at Lady Margaret Hall. He enjoys jokes and watching cars drive around in circles but dislikes writing about himself in the third person. More by Jacob Reid