The Oxford Union does not have a reputation for solemnity, so its debating chamber was the perfect theatre for the frenzy of this year’s Town vs. Gown boxing event. Yet it is important not to stretch any comparison between debating and boxing too far. With all due respect to Union hacks, I’m not sure they have much of an appetite for the physicality and pandemonium that characterised the evening.

As we were escorted in, clutching notebooks and press passes, it became clear that this was not an event at which things were going to be done in half measures. Some of the outfits on display amongst the assembled masses bordered on the extraordinary. A particular highlight was the crimson smoking jacket, paired with crimson patent leather shoes, that a stylish gentleman in the VIP area was sporting.

Such opulence was beyond the budget of both myself and Junior Editor Gordon, but we were afforded the next best option. Our press privileges meant that we found ourselves seated on the front bench, a terrifyingly small distance from the cauldron of a ring that had been erected in the debating chamber. These seats gave us an unimpeded view of the evening’s proceedings. 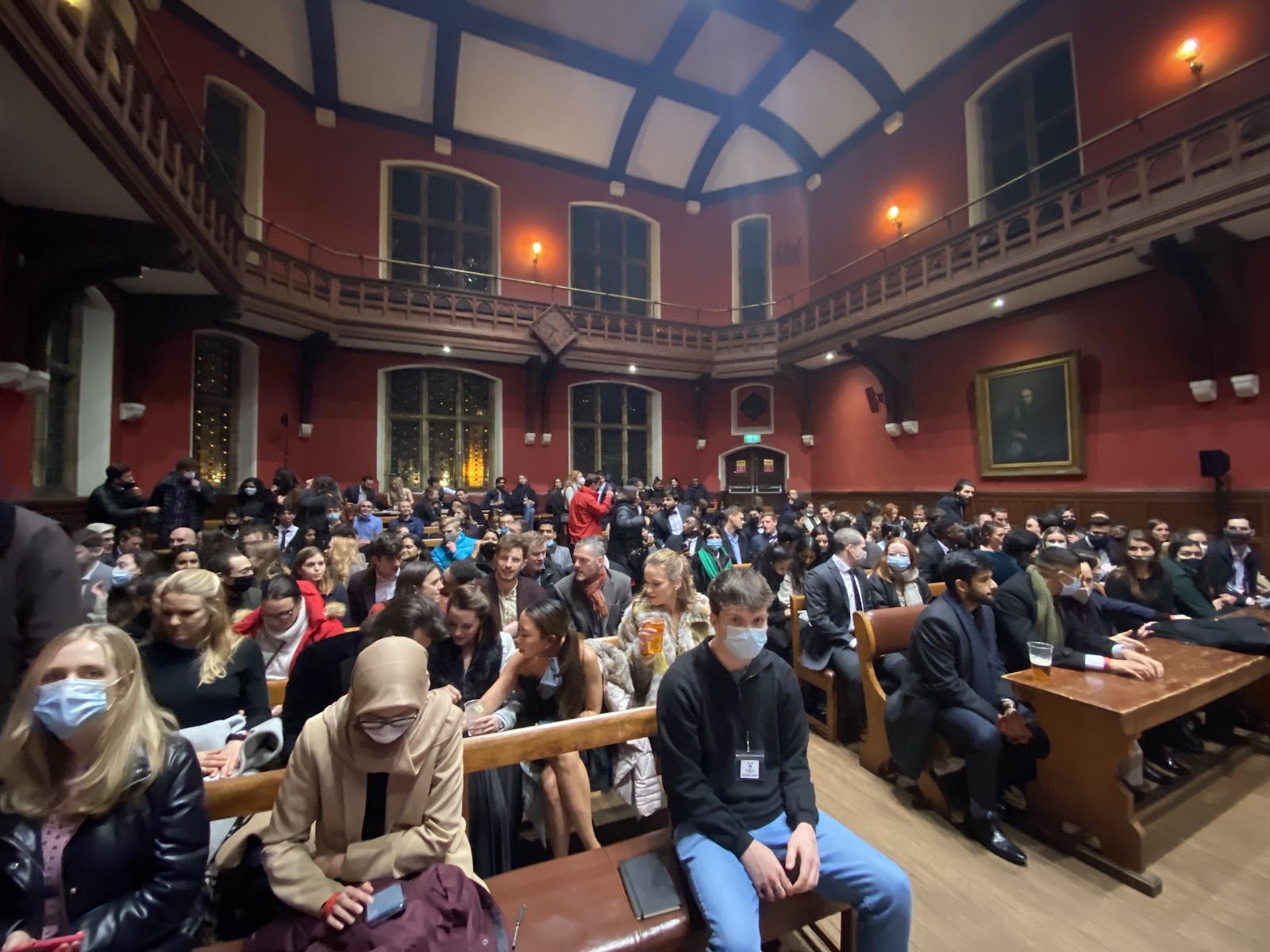 Whoever was in charge of the music took a determined – if undiversified – approach to stoking the crowd’s excitement. ‘Sweet Caroline’ was played at least four times, but nobody seemed to mind. More to the point, the general atmosphere and the attitude of the crowd were first class all evening. The support, especially for the Oxford boxers, was unwavering and enthusiastic. The cult of Jacob ‘Lord of the Ring’ Bignell, who won the ferocious ninth bout on a unanimous decision, was out in full force.

Each fight was closely contested, especially the six bouts which featured two boxers from OUABC. The aim of these internal fights is to provide the Oxford boxers, many of whom are relatively new to the sport, with indispensable experience ahead of the Varsity fixture later in the year. The first fight, between Amelia Jeffries in the red corner and Jasmin Patel in the blue,  really set the tone for the evening. Patel’s smaller stature and dexterity in evading her opponent’s punches allowed her to negate the punches of her ostensibly more powerful opponent.

This was perhaps the biggest lesson which the night taught me: it is not all about who hits hardest. I think that those who have not yet been initiated into the boxing world are too trusting of misconceptions. For instance, I am a particularly squeamish commentator, who would no doubt be worse-than-useless if I ever found myself in a combat situation, so the very concept of boxing naturally terrifies me. But once I had processed this, I began to appreciate just how skilled the fighters were. It was the lightness of their footwork and the precision of their punches which really made the difference. The fourth bout made this point most strikingly. It was won by Vintel Romain, an Oxford boxer whose general slickness was quite remarkable. Even though he was confronted by a spirited and busy performance from Josh Williams, Romain looked unflustered and took the first of the night’s three unanimous decision victories. Romain’s performance was also impressive for a second reason. As part of the boxing education that the evening provided me with, I learned about the pre-bout convention where boxers invite their entourage into the changing room to, for want of a better phrase, hype them up. Whereas some of the boxers had assembled significant noisy fan clubs, notably Callum Harvey of Blackbird Leys ABC, Romain apparently did not require such treatment. His mother joined him pre-bout for what one can only assume was a uniquely wholesome pep-talk.

Proceedings took a serious turn after the break which followed the sixth bout, as the literal heavyweights were wheeled out. The Loughborough student who won the final bout, Travis Hunter, gave a whole new meaning to the term ‘big unit’. Having seen him pack down in the back row on the college rugby pitch, I can say with absolute authority that Junior Editor Gordon doesn’t usually get nervous, yet some of the heftier punches extracted winces even from him.

When the night ended, we strolled out into the night, awe-struck. Going out on a Friday evening in Oxford is famously an activity for the moron, or the naive fresher. This event was a notable anomaly. A huge amount of credit must go to the committee of OUABC, who put on a night of superb entertainment. The talent on show, from both ‘Town’ and ‘Gown’, was a marvellous advert for boxing. And to quote everyone’s favourite bespectacled football supporter, “the atmosphere was electric”. The roar of the crowd and the croonings of Neil Diamond still echo in my ears.

There is great irony, I believe, in the fact that Ollie and I were covering this event. Since our limited boxing knowledge stems from watching the highlights of the Wilder v Fury fights, we came in with little to no technical knowledge of the sport. This was made up for by our enthusiasm, which was driven by a sizable appetite for something to do on a Friday night.

The Oxford Union usually acts as the arena for fierce debates, however this night the chamber took on a more gladiatorial light. The spectators brought a ferocity to their support that could only be compared to the Colosseum of Rome, and the crowd’s chosen gladiator quickly became apparent. Jacob Bignell garnered a level of support so great that his home-field advantage could not be overturned by any level of skill from his opponent. When I tried to determine the root of such enthusiastic support, MBA student Max Smith simply stated that “He’s a top bloke.” The Oxford faithful turned out in their masses to support the entire OUABC contingent, however, generating an electric atmosphere. Even by the 4th rendition of Sweet Caroline, the supporters sang thunderously.

Having played a combined two decades of rugby between the two of us, we foolishly assumed that we were prepared for the level of physicality that would be displayed in the ring. Whilst the ferociousness of Brasenose College RFC on the rugby pitch should not be understated, it became apparent very quickly that this was different gravy. Watching the sweat explode off the boxers with each successive blow was truly an extraordinary sight – division 4 college rugby, this was not.

This was no less apparent with the performances of Callum Harvey of Blackbird Leys ABC and Travis Hunter of Loughborough University. Whilst the outfit choices of his supporters drew quizzical reactions, there was no debating the boxing ability, nor the “fear factor” of Callum Harvey. Entering the ring in a hoodie that covered his eyes, matched with biceps the size of rocket launchers, Harvey made Senior Editor Nicholls and myself literally quake in our boots. Much of the same could be said of the stature of Travis Hunter, who upon entering the arena drew the reaction of “Jesus look at the size of him” from an unknown spectator behind me. What impressed, even beyond his physicality, however, was the agility and precision with which Hunter boxed. Even the most inexperienced of boxing spectators could understand his pedigree  immediately, as was evident in the resulting third round stoppage by the referee.

As the crowds stumbled out beneath the stars at the end of the night, it was clear that we had all seen something quite special. The atmosphere, electric, the performances, dazzling, the variety of music played, perhaps underwhelming – but certainly no one left the Union that night without having enjoyed an evening of entertainment of the highest caliber. Expect to see Ollie and myself ringside next year – this isn’t an event to miss.

All photos taken by Ollie Nicholls at the event itself.

Outside of his degree you can find Ollie stoically supporting the ever-woeful Fulham FC and stress drinking mugs of Earl Grey as a consequence. More by Ollie Nicholls

A deep dive into spaces for women in Oxford. In ou