The anticipation for this fixture could not have been higher. Since the game had been strategically timetabled to take full advantage of the frenzied post-collections search for a ‘fun day out’, the crowd that converged on Iffley Road yesterday afternoon was allegedly 2,000 strong. Packed into the stands and pressed up against the white fences surrounding the pitch, the masses were treated to a feast of ‘liquid rugby’.

My day started with a browse of the programme, which revealed the slightly surreal fact that the majority of those kitted out in England red had been born in 2003. The incredulous requests for birth certificates that ensued from those on the side-lines fell on the deaf ears of these colossal 18-year-olds. As it was, not much flustered them during the warm-up, and the far-fetched attempts of some of the supporters surrounding me to ‘rattle’ them with their genteel ‘Oxford chat’ were in vain. A particular highlight, from an individual who will remain anonymous for his own sake, was the instruction towards an England player to “put his head in the freezer but his body in the fire”. This did not have the intimidating effect that had presumably been intended. The Principality Stadium, this was not. The red-clad giants were instead focussed on slamming themselves very hard into a set of luminous green tackle bags, which had presumably committed unspeakable crimes to deserve such treatment. At the other end of the pitch, one would have forgiven the Blues a few nervous glances in the direction of their international opponents.

Although this fixture had been billed as a friendly, it was clear from the first whistle that nobody had taken the time to inform the players of this fact. And it was England that drew first blood, bludgeoning their way over the try-line from a rolling maul within the first minute. However, this early disappointment did nothing to dent the confidence of those in navy blue and, perhaps more importantly, had no effect on the enthusiasm of the crowd. The atmosphere all day – although not exactly febrile – was certainly boosted by the generosity of those staffing the Iffley bar: ‘The Drunken Ferret’. Shot measures were firmly dispensed with, and a decidedly cavalier approach was taken to the preparation of the vodka lemonades.

This fuelling of the crowd’s enthusiasm played a part in the counterpunch that the Blues then executed on the pitch. Set up by some industrious work at the breakdown and a finely judged kick to the corner, Oxford’s pack, fired by an international of their own in the form of Nick Civetta, steamrollered their way into a 12-7 lead early in the first half.

Unfortunately, this was to prove the high point in proceedings, as England pulled away with some silky backs play and went into half-time with a 33-12 lead. The pick of the bunch was a delightful finish from Cassius Cleaves, the England left wing, who turned on the proverbial afterburners to cut a disjointed Oxford defensive set into ribbons and dot down in the corner.

This scoreline did flatter the English, as one of their deluge of tries quite plainly resulted from a forward pass which the referee bafflingly failed to notice. Even I, 40 feet away and several reasonably priced Guinnesses deep, was able to determine this lapse from the man in yellow, who turned in an otherwise unblemished performance. 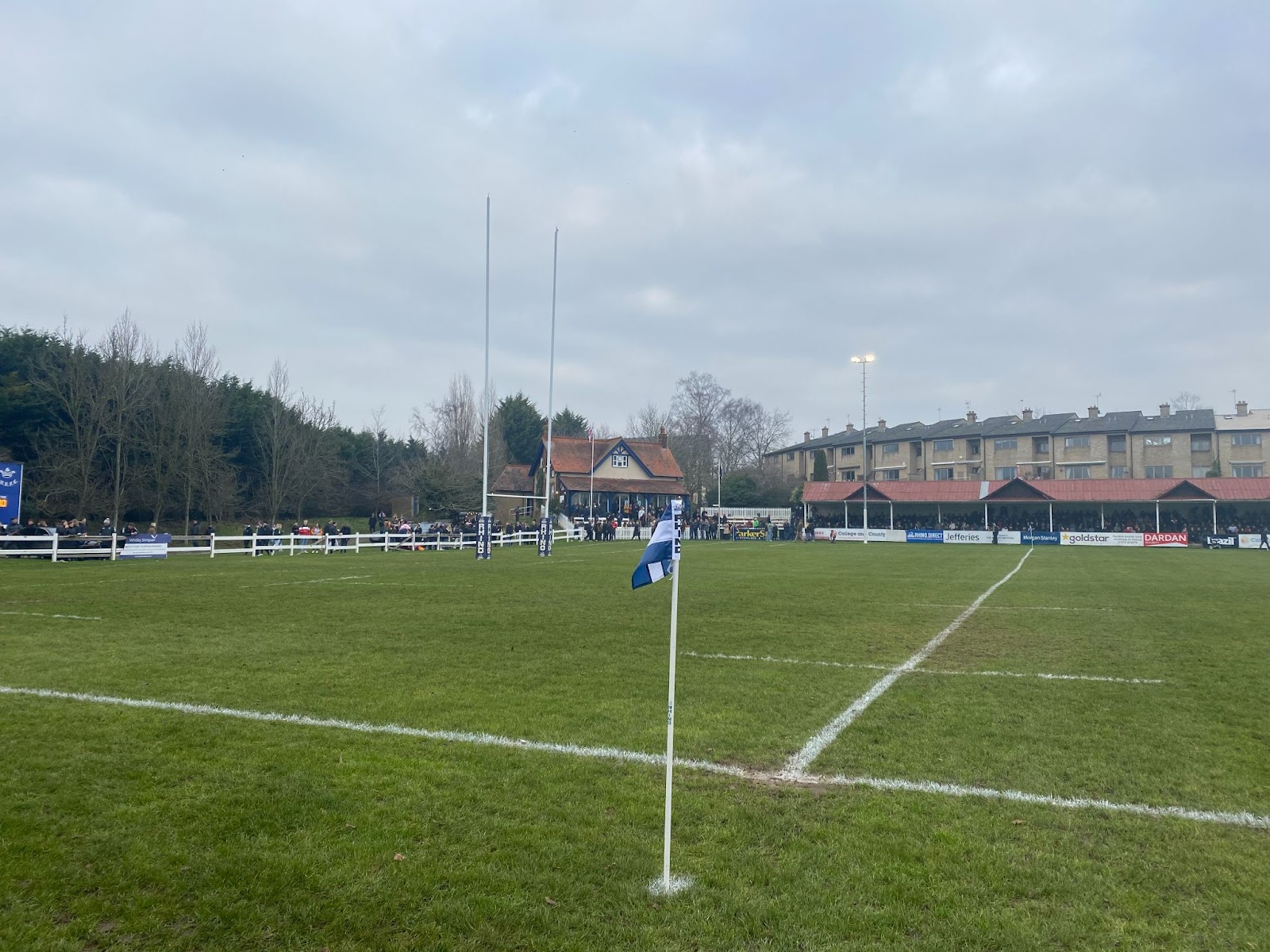 Nor did this brief period of English dominance mar the intensity on the pitch. After the English right winger, Deago Bailey, overreacted to a mistimed tackle in the corner by his own try line, tensions boiled over momentarily and a slightly terrifying bout of wrestling ensued. From this point onwards, Bailey was the target of most of the crowd’s taunting. The most specific criticism which I heard from those around me centred on his inexplicable decision to shun the official England rugby socks and opt for more calf-flattering ankle socks instead. Such prima-donna behaviour was not to be tolerated, and the surprising lack of mud on the maligned winger’s knees contrasted starkly with those in dark blue, who were practically caked in the stuff.

The half time interval coincided with the ‘5 Guinness mark’, at which point I sensibly decided I had probably overindulged with respect to the cans. Unlike my colleagues, I had no wild plans to attend the ‘after party’ at Bridge. My attention thus returned entirely to the game, which remained a lively contest in the second forty minutes.

As the second half started, the English backline, who had been marshalled well by a disciplined Oxford press led by inside centre Louis Jackson, began to make their quality show. Their increasingly outlandish offloads and incisive running produced a distinctly jealous look on the face of the Brasenose College Rugby Captain, Louis ‘Café’ Lennon. As he watched sequence after sequence of crisp handling, he inwardly bemoaned the inability of his own team to execute even the simplest of backs’ moves.

Yet for all this flashy rugby, it was a try from a lineout which opened the scoring in the second half. Industry from the two forward packs was certainly a theme of the day, and the latest rolling maul inched its way over the whitewash to make the score 12 – 40 to England.

To lighten the mood, my companions and I returned to an earlier debate about whether 15 Brasenose layabouts would be able to defeat a 7s team comprising the England backline. This debate was definitively settled mere moments later. Any lingering faith in the dubious abilities of a Brasenose XV was swiftly dismantled by a sweeping English set-piece move that was rightly described by Junior Editor Ewan Gordon as “utter filth”. Starting on the halfway line, a gorgeous miss-pass from George Hendy – remember the name, he was superb all afternoon – allowed the outside backs to dazzle the crowd on the far touchline. One lightning-fast phase later, a chip-and-chase that Lord Marcus Smith would have been proud of resulted in five more English points.

Oxford’s valiant performance did not end here, although the game had slipped beyond them. Bolstered by fresh legs from an encouragingly youthful bench the men in blue were able to claim the final points of the day, meaning that the referee called time on the game with the score line at 54-31. The old adage may claim that the scoreboard does not lie, but there were huge positives on display for the Blues yesterday. Some of my doom-mongering companions had predicted a thrashing of the sort historically handed out to Six Nations whipping-boys, Italy, but neither the final score, nor the evidence on the pitch remotely validated such pessimism. It was particularly encouraging to note the sizable undergraduate presence in the squad, and such depth within the ranks of the Blues will be indispensable as preparations for the Varsity Match commence in earnest this term.

Outside of his degree you can find Ollie stoically supporting the ever-woeful Fulham FC and stress drinking mugs of Earl Grey as a consequence. More by Ollie Nicholls

A deep dive into spaces for women in Oxford. In ou