Every one of us is concerned with how to best shield those most vulnerable in our society from the looming shadow of the coronavirus; whether that be the elderly, the immunocompromised, rough sleepers, or our essential workers who put themselves in the line of fire every day. But what about those most vulnerable in the world? As countries strain to provide PPE for their own populations and brace for another recession, the fate of the 7.2 million refugees living in camps and settlements is becoming increasingly concerning.

In acknowledgement of the vulnerability of these populations to the virus, the United Nations High Commissioner for Refugees (UNHCR) is calling for $255 million from member states. “We must come to the aid of the ultra-vulnerable – millions upon millions of people who are least able to protect themselves,” said U.N. Secretary-General António Guterres this week.

The large population densities, sharing of facilities, limited access to basic needs and information inherent to refugee camps, and the growing financial strain of governments and nonprofits in the wake of the COVID-19 crisis makes refugee populations extremely vulnerable to this disease. “The global coronavirus pandemic will make them [internally displaced people] more vulnerable still. It will compromise their already precarious living conditions, by further limiting their access to essential services and humanitarian aid” says IDMC director Alexandra Bilak.

The potential disaster stemming from these conditions is being watched with concern by researchers. The Kutupalong-Bulu Khali Site in Bangladesh, for example, is a network of 23 sites of some 600,000 Rohingya refugees. Most arrived in the area following violence in Myanmar in 2017. This brings the population density of the site to a shocking 46,000 per km2, overshadowing that of the densest city in the world (Dhaka, Bangladesh at 44,000 per km2). The site has no access to the internet and is under a ban on mobile phones making the spread of vital messages pertaining to social distancing and hygiene impossible.

Concern for this site specifically grows as it has only five hospitals and a grand total of 340 beds for its 600,000 inhabitants; so much so that a group of researchers at John Hopkins recently published a report modelling three scenarios of infection in this population. The three scenarios took different R0 values modelled from data in (1) Chinese provinces with elevated isolation; (2) Wuhan at the early stages of the outbreak; and (3) an open community setting based on the 2017 diphtheria outbreak. R0 refers to the average number infected from one person i.e. an R0 of 3.0 reflects that, on average, one person infects three others. The results are summarized in the infographic below. 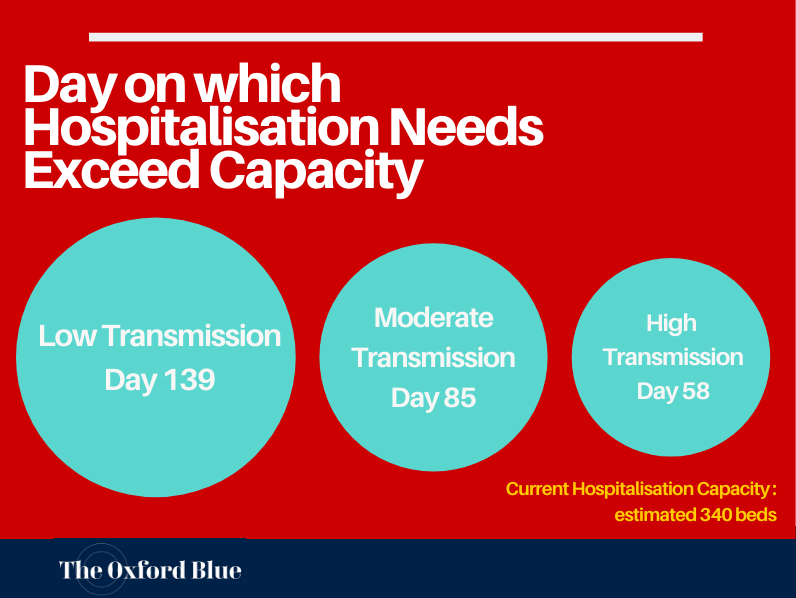 The results speak for themselves – and with a 65%-93% probability of an outbreak of greater than 1000 after a single introduction (in a low and high transmission scenario respectively), the result of this pandemic could be catastrophic for this refugee population.

The Syrian Civil War, now entering its tenth year, has displaced more than 6.1 million people with 5.3 million of these fleeing to surrounding countries. The escalation of violence by the Assad regime (backed by Iran and Russia) against the last remains of the rebel forces between December 2019 and early March 2020 led to a further one million leaving their homes. The province of Idlib is the last stronghold of the rebels and has a population of around 3 million. Many civilians currently inside the province have been displaced “between five and ten times” due to the conflict according to a report by Refugees International published on March 28th 2020.

Syrian refugees elsewhere in the world  – such as the 12,000 refugees across the Za’atari and Azraq camps in Jordan – have had their camps put under lockdown in order to delay the infiltration of COVID-19 into these areas. However, the 3 million that currently reside in Idlib “lack a strong and legitimate authority to impose such measures after years of violence that have decimated its infrastructure” says the report. To make matters worse, the agreed ceasefire on March 5th between Russia, Turkey, and Syria resulted in a security corridor which reduced the territory of the province to 3,000 km2  from 7,000 km2 in April 2019. The upshot of this: an area which prior to 2011 was home to 500,000 now has 3 million civilians seeking refuge in its territory.

So far, the Damascus-based Syrian government has confirmed only 43 cases and 3 deaths from the virus, yet concerns persist about the fate of this refugee population. The civil war has put out of service more than 80 hospitals in the region whilst those remaining have only 100 ventilators – all of which are currently in use. Beyond the absence of resources to deal with an outbreak, the underlying health conditions resulting from combat, chemical attacks, malnutrition, and poverty will no doubt exacerbate the impact of a COVID-19 outbreak. A local doctor, when speaking with Refugees International, confirmed as much in saying “a lot of my patients suffer from respiratory and immune problems caused by the war. This makes many prone to greater risks of being affected by the coronavirus.”

To add insult to injury, about two-thirds of the population of Idlib relies on humanitarian assistance which Turkey has sought to inhibit. Not only has it reduced the number of medical staff able to travel between Idlib and Turkey, but it has also announced that the country will not be exporting locally manufactured face masks – despite delivering some 84 tons of PPE to the UK.

There may be hope yet, however, as the World Health Organisation (WHO), the Health Directorate, and other humanitarian organisations plan to bring an additional 100 ventilators to the region, support testing facilities, conduct awareness campaigns, and (most importantly) open three isolation hospitals and 28 community-based isolation centres. The only obstacle seems to be the estimated $33 million price-tag and the reduced generosity of donors due to economic fears surrounding the pandemic.

As we worry about the impact of this pandemic on our lives and our economy, it is vital that we think of those most vulnerable in the world. With governments’ feeling the strain on their own economies and resources, a recession would no doubt degrade any generosity in supporting displaced people. “As global resources to fight this pandemic become scarce, displaced persons must not be forgotten,” the John Hopkins researchers write. This pandemic is not enclosed by borders, and neither should our aid for those most vulnerable to the virus in the world.

If you are interesting in helping the refugee population please visit: https://www.solidaritee.org.uk/

Paulina (she/her) is a News Reporter at the Oxford Blue, was previously a News Editor on the paper, and is currently a section editor (Middle East and North Africa) at another publication. She is a second-year History and Politics undergraduate at Trinity College. More by Paulina Maziarska